Does the Driving test fail everyone, failings in driving lessons

Don’t you just get sick to the stomach every time there is another story, another crash, another cry for someone to do something when it comes to young drivers.

Well, this week, we had two corkers in the office, astounding and dumbfounding. One was a current driving school instructor who sat in on our talk, “How to crash proof your kids.”

Her response was appalling, stating she did not learn anything and that it was all propaganda. The irony of her statement – during the school’s program at Robina High School, the only student who had his licence, had crashed four cars in three months. Guess who his instructor was.

But apparently she knows it all and her boss, is the best driving instructor in the world, anywhere. big claims….and that is the problem with the current driver training industry. It has been driving the process for decades, all about rules, have to pass the driving test, yet it is the same industry that is continually delivering these appalling statistics. 1/3rd crash in their first three months and somehow this is acceptable. It is also the same industry that is so reluctant to change or embrace change, it is easy though to blame the student….

Passing the driving test, does not prepare them as a driver

According to the NSW estimates for 16- 17 the road toll increased by a whopping 25%. this is against all global trends.

On A Current Affair 17/08/27 was another story on the carnage of our young drivers on the road. The story of the trauma for those left behind, the broken families, the heart break, it is an all too common occurrence and story.  Story here

The focus of the report was more restrictions, more penalties and more calls for something to be done, They claim that within the first year of passenger restrictions and 120 hours of supervised driving there was a 35% reduction in accidents, yet what they do not state was there was also a corresponding reduction in licence applications.

They claim, and rightly so, that post driving test, their first year on the Red P plates, they have five times the fatality rate and accidents 30times the average.

They also claim for every passenger in the car, the accident rate rises by 50%.

Infact, everything they are claiming points to the fact that kids are just not being taught how to drive, at all.

So, with all this emotion around, with all the reality of real-life trauma, horrific accident rates and the desperation and urgency in a call to action, we get an inquiry for a gentleman who lives in the area where the four boys died. He wanted driving lessons for his daughter.

And he didn’t want to know.

He did not want to make a commitment, he just wanted cheap driving lessons. He thought he knew how they should be placed, wanted them done as quickly as possible, and he wanted to define the payment terms

He was told the benefits of the program, proven through research, massive change in driver behaviour, reduces accident statistics from 1/3rd crashing in their first three months to one in three years, a parent mentoring program, to support him, for the 120 hours of driving.

His response “you’re wasting your time, I’m not even listening, it is not what I want to hear.”

Are parents the real trigger behind youth driver accident statistics?

It is actually stemming from the parents. Thrust into a role that they are ill-prepared for, making decisions on a subject they know little about.

We all believe we are fantastic drivers and amazing lovers, as they are the only two things we actually teach ourselves how to do.

Yet if every time we go for a drive, we criticise those that we share the road with, then are those people criticising us? Who is actually the best person to teach our kids how to drive, to survive, to always come home. Surely that is the required outcome.

This is the only form of education where the supervisor is allowed to be self appointed, based on relationship alone. If every time we go for a drive, we criticize those we share the road with, well, they are the same people teaching their kids how to drive.

So, is it all the parents fault?

Well actually no, see they believe that driving schools are all the same, just like “school” their kids have been in for the last decade.

The kids all believe if you meet the requirements, you do your 120 hours of supervised driving, that you can drive.
They both, universally believe that when you pass the driving test, they can drive.

Yet the statistics are compelling.

What really happens is the entire focus is just to pass the driving test. Let’s look at NSW as our case study.

Outcome:        Nothing really, just driving around the test routes in preparation.

Outcome:        a one day theory course, with a road drive component on the basics of driving

The actual result – Students fudge through the first part of their log book, then use programs and initiatives to fast track the hours, just to pass the driving test.

The student and parent believe they have complied, not realising everything that is not happening. The preparation is haphazard at best. There is no curriculum approach, nothing joins or connects in a training or methodology approach and the emphasis is still to pass the driving test.

People are still left to “Learn their own way” we wonder why they are crashing cars post licence.

Instead of approaching the industry from experience, from research, from even common sense, we let it be driven by propaganda and emotion. The very people who are driving the propaganda and emotion, the parents, officials, refuse to accept any liability or responsibility in regards to their involvement at any step of the program.

The message on what is required to develop great driving skills is so confused, that people believe all they have to do is follow the rules. Yet the statistics show that compliance with the rules does not change the appalling accidents.

The solution, it is all the student’s fault…..

No other form of education allows the

See, that is what the statistics are really showing. Is that the approach and emphasis of learning to drive to pass the test, has little to do with the act of driving. That rules cannot and will not keep them safe and according to the “systems proponents” they then need more time to learn by experience

It really is a fast track on the Highway to Hell.

Reducing fuel consumption by 20% with the ART of DRIVING 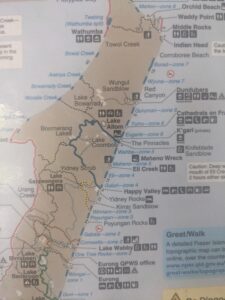 Top ten tips for 4WD trips -The Story of Planning, Preparation and Performance

Graduates of Total Driver have a 400% reduction in accidents over the first 3 years of obtaining their license, in comparison to the national average*.

The question we ask all supervisors:

“Will you bet your child’s life you have the skills to teach the art of driving?”