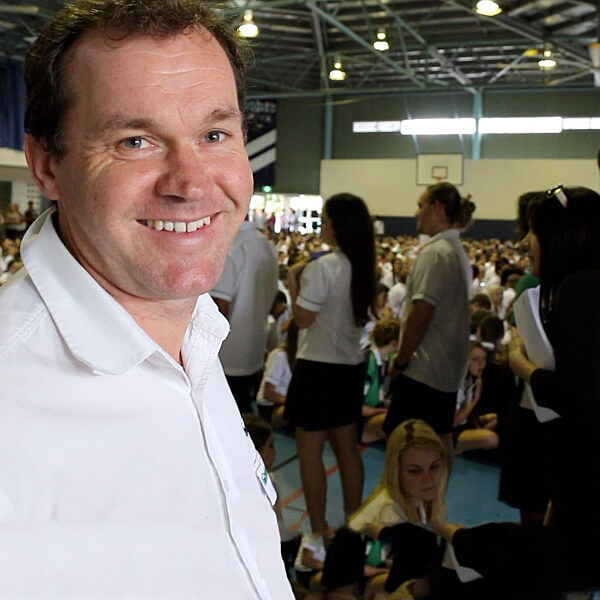 How many times when you go for a drive, do you criticize the other drivers you share the road with? How often do you watch the news, read the papers, see the internet and find yourself shocked at just how often people crash cars, the trauma, the pain for those left behind and think “There has to be a better way."

Gene’s Corbett’s passion and experience in the driver training industry spans more than 15 years. He is widely regarded as one of the country’s leading road safety advocates and regularly features on TV, A current affairs programs, radio and print media.
He is a former professional driving instructor

The pinnacle of Gene’s career was being a member of the team of performance driving instructors as part of Mercedes Benz F1 program in 2003.

A passionate and committed advocate for more effective and efficient driver training programs, Gene saw that there was a better way. He drew on years of his knowledge and experience to provide better training to the drivers and parents of tomorrow. As a result, in 2004 Total Driver (Australia) was formed.

The current structured Total Driver Program was developed over a period of 10 years in order to find the right mix of competency and behavioural change needed to create a safer, more responsible driver. To support that process with cultural change and integrate the community to share the passion for Safer drivers, Safer roads and Safer communities.

The core objectives for Gene and the Total Driver program is to produce consistent results, regardless of region, demographics or culture, to reduce driver accident rates and save young lives.

There are many success stories that have come from the students of Total Driver, two of the most notable include:

More importantly, there are students who, through learning impairments and other issues, were told they would never be able to drive, not only have they been successful with the Total Driver program, they are actively contributing, and driving safely within the community.

In 2005, Gene was appointed to facilitate a national program for team Triple Eight Racing for their sponsor Dominos Pizza. In conjunction Gene engineered the Betta Boss ride car and ride car program that gave people the chance to ride and drive beside their heroes Craig Lowndes and Jamie Whincup.

In addition, Gene and Total Driver have been involved in the successful creation, development and deployment of driver training and education programs for a range of organisations, including: Essential Energy, Southcorp Wines and Domino’s Pizza and CHOGM.

Total Driver has played an essential role in many Australian vehicle launches. These have included:

Ford with their launch of the following models: BF falcon, SY territory, FG falcon and Focus

Land Rover with the Discovery, Sport and Vogue models.

These launches were innovative, creative and an Australian-first in the formats that were utilised.

Throughout his career, Gene has assisted thousands of people from all over Australia to become safe and confident drivers by passing on his skills and knowledge.

Gene is a regular media commentator on road safety issues having provided expert opinion to, amongst others;
The National Road Safety Council,
Sixty Minutes,
Channel Seven’s Sunrise,
Seven News Qld,
Many local radio spots
Gene and his team, firmly believe there is a better way of preparing new drivers. It is called Total Driver. A structured program of integrated competency based learning modules, that prepares parents as we prepare the students, supported by a schools’ education program that combines for a common goal, to release the Total Driver within every person.

Starting in 2016 Total Driver began its rollout of its franchise model with expectation to penetrate the national market and effect a change in driver behaviour nationally.

As Seen on 60 Minutes

Bruce Lynton has employed total driver on several occasions to conduct four wheel drive driver training and customer days at various locations through Queensland. I have no
hesitation in giving my personal recommendation to Total Driver to manage and conduct driver training and events.

Driver training days organised by total driver have always been professionally run providing great assistance to our members, especially novice drivers embarking on motor sport at a club level. The competency, experience and attitude of their instructors has always been of the highest standard.

Ford Australia has utilised the services of Total Driver on a number of company customer driver day events and new vehicle launches in the last few years. The overall execution of the event demonstrated Total Drivers ability to partner with Ford and the Ford Dealers to deliver a great outcome. Based on our experiences…

It goes without saying that Total Driver has exceeded Domino’s expectations in 2006. The team are extremely easy to deal with and have made the safe driver project seen effortless. Their support for Domino’s has beem outstanding.

Darlington Park was an outstanding achievement for all persons associated with Total Driver and Gene Corbett. After experiencing driver tuition from the Team at Total Driver I have no hesitation in recommending Total Driver. They were great

The training was exceptional

After almost a year of rehabilitation and multiple surgeries, I began the search for a new driving school. The training was exceptional, and far different from what I received from a regular driving school. A company devoted to being the best driver trainers possible.

Total Driver developed specific training programs to get my clients back up to speed with amazing results, care and dedication.

My driving has definately improved as a result

I have been driving for 10 years since my accident, after learning a few of lifes lessons, it was time to get behind the wheel again. The difference in the approach, how they looked at the way I drove, it suddenly was not a generic drive focused on the rules to pass the driving test,… Read more “My driving has definately improved as a result”

Terms and Conditions The Total Driver program is a commitment from all parties to deliver the outcome of safe, better-prepared drivers in th

e ART OF DRIVING. The program shows accountability and transparency at each step for both instructor… Read more “Terms and Conditions”